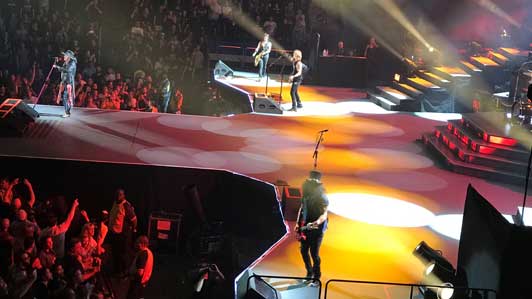 Guns N' Roses was formed in 1985, and though the band was together for only six years, it made some of the most memorable tracks of the '80s and '90s. Other than its lightning-fast lyrics and rhythm, the band is probably best known for its epic arguments among band members. Guns N' Roses is the epitome of '80s rock and roll therefore getting cheap Guns N Roses tickets to one of their shows is like stepping back into an era of big hair, big egos, and big sound.

Guns N' Roses surprised their fans in 2016 by reuniting for a massive world tour. They played at T-Mobile Arena, Coachella, and other world-renowned venues and events. The tour ended up grossing over $563,300,000, making in the second highest-grossing tour of all time. In more recent news, Fortus, Slash, and McKagan have all stated that a new album is currently in the works! A new album from these rock legends can only mean another groundbreaking tour in the near future.

Beginning in July 2021, Guns N’ Roses embarked on a summer tour across the US. The band performed in multiple Major League Baseball stadiums, including Comerica Park in Detroit, Fenway Park in Boston, and Nationals Park in Washington, DC. Be sure to check the full schedule of cheap Guns N’ Roses tickets to see if they perform at a venue near you!

How much is Guns and Roses tickets?

Tickets to see a Guns N Roses concert live vary in price based on where the concert is located and where the seats are in the venue. Guns N Roses $227 tickets are available on CheapTickets.

When are Guns N Roses going on tour?

Gun N Roses started their latest tour at the end of 2021 in Europe and went to the UK for summer 2022. Secure tickets to see Guns N Roses live!