Live events
More travel
Event Tickets Support
Resale prices may be above or below face value.
Charlotte, NC
All Locations Current Location   loading...
You have disabled location tracking in your browser. Please enable it or enter your location below.
All Dates
From
To
Pick Dates Today This Weekend This Month All Dates 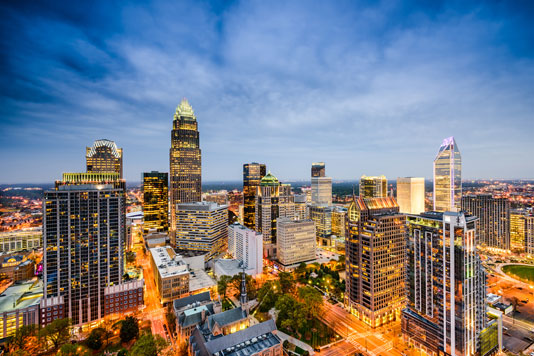 When you're looking for a fun and budget-friendly event destination, choosing to enjoy an event in Charlotte, NC can be a good bet. The city is home to a varied offering of entertainment options, including upcoming concerts in Charlotte, NC as well as events for sports and theater enthusiasts. When looking for Charlotte Hornets tickets or other Charlotte event tickets, you won't have to worry about price as Charlotte has big-city offerings at small-town prices.

Arts are a big draw for visitors to the Queen City of North Carolina, and there are many different shows in Charlotte, NC, that will meet everyone's entertainment needs. You can take in any of the 1400 different works of art at the Bechtler Museum of Modern Art or the Mint Museum, which houses historic costumes. Alternatively, take a trip down to Blumenthal Performing Arts, a multi-venue performing arts center that is home to both the Charlotte Symphony and Charlotte Ballet.

Depending on the time of year you decide to visit, you'll find a variety of offerings for Charlotte weekend events. Every weekend in October and November, Charlotte is home to the Carolina Renaissance Festival. There are also the many holiday-themed festivals and street shows that pepper the Charlotte calendar of events throughout the year and celebrate the city's varied history and cultures.

If you'd like to check out the Charlotte Hornets basketball team, visit during fall or spring as the competition heats up. If the NBA is not your cup of tea, you can catch the many other sports teams that call Charlotte home, including the 2015 National Football League Division Champion Carolina Panthers.

Get your cheap Charlotte event tickets today to make the most of arts and culture, sport and more.

First founded in 1755 as Charlottetown, Charlotte later became a city due to the foresight of surveyors. In 1770, they decided to mark the streets in a grid pattern for future development. This grid pattern allowed the town to grow at a marked pace, eventually becoming the largest city in North Carolina with over two million citizens in the Charlotte NC metro area. Baseball has been played at a very high level in Charlotte since 1892 when the Charlotte Hornets debuted in a competition known as the South Atlantic League. Despite being a warm-weather Southern city, Charlotte has a long ice hockey history that dates back to 1956.

Did you know these facts about Charlotte?

Things to do in Charlotte