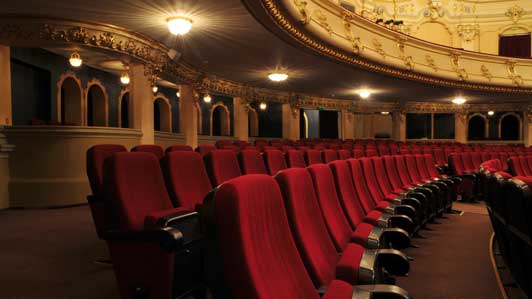 The Shen Yun Performing Arts company, founded in New York City, is an entertainment group that has been performing Chinese and Asian-inspired dance productions since 2006. It's the most prolific Chinese performing arts group in the country, and tours for seven months of every single year, visiting hundreds of cities worldwide. With a crew of more than 200 dancers, performers, instrumentalists and crew members, Shen Yun Performing Arts was founded by followers of an ancient spiritual discipline in an effort to preserve millennia of Chinese culture in all its beauty and grandeur. Each production features dozens of short performances that range from traditional dances to performances by musical soloists. It's hosted in both Chinese and English and is jam-packed with nearly three hours of incredible beauty and majestic art. Elaborate costumes and design are a hallmark of Shen Yun Performing Arts, and each performance is accompanied by a dynamic and beautiful backdrop which the company projects onto the stage and which shows the rich beauty and culture of China and its neighboring areas. Now's the time to find cheap tickets for the Shen Yun Performing Arts tour, which is coming soon to a city near you. Don't miss the chance to behold over 5,000 years of culture in a single event.

How Much are Tickets to Shen Yun?

How Do I Get Discount Tickets for Shen Yun?

What Does Shen Yun Stand For?

In Chinese, the word “shen” generally means divinity and the word “yun” means rhythm. Shen Yun explores the spiritual traditions of Chinese culture through rhythmic performances. Discover the meaning of Shen Yun by purchasing your tickets on CheapTickets and see the show live!