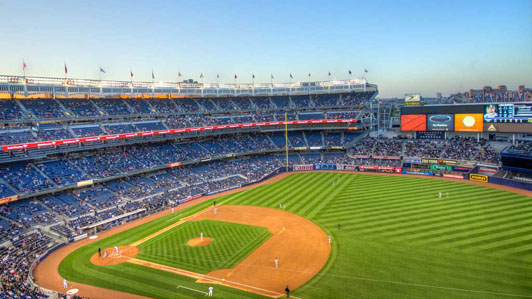 What’s a better way to connect with your friends and family than attending a Major League Baseball game? Imagine yourself in the stands at a baseball game, catching up with old friends, sharing your love for baseball with family, or maybe getting to know someone on a date! Keeping you on your toes throughout, a game can change in the matter of seconds with the sharp crack of a bat. Baseball produces some of the most loyal fans in professional sports, filling the stands rapidly on games days. Grab your cheap MLB tickets here and get ready to sing along with the whole ballpark during the 7th inning stretch!

Major League Baseball is the oldest professional sports league in the United States and Canada. Founded in 1903, the league was not the first to professionalize the sport of baseball. Dating back to the American Civil War, the sport was played by soldiers while they were at camp. After the war had ended The National Association of Base Ball Players (NABBP) was formed as an amateur league and by 1867 there were over 400 clubs in the league. In 1869 the first professional baseball team was formed; the Cincinnati Red Stockings, today known as the Cincinnati Reds. After the founding of the Reds, the NABBP dismantled into two groups; professionals and amateurs. The professionals would go on to create what is today known as the National League. For years they were the only league in the sport until 1901 when the American League was created. During the 1920s and the early 1930s the sport began to rise in popularity due to star players and teams beginning to emerge from the woodworks. When the Great Depression hit, baseball managed to survive as the primal entertainment for Americans when they cut player salaries to allow for lower ticket prices, and even letting in women and children for free. Throughout the 1950s and 1960s the league took a risk and began to expand across the country, building new stadiums and implementing the use of artificial turf. In the 1990s and 2000s the league was plagued with accusations that some players were taking performance enhancing drugs. Even through its rollercoaster history, baseball remains to this day one of America’s favorite pastimes.

Today the league is made up of 30 teams, 29 of which are in the United States and 1 in Canada. The teams are split evenly down the middle, with 15 representing the National League and 15 representing the American League. Seasonally the teams play a total of 162 games, and the top five teams within each league go on to play in tournament style playoff games. Today with dynamic teams such as the New York Yankees, Boston Red Sox and Chicago Cubs the league has greatly evolved from its early stages.

The MLB season begins well in advance to the regular season. Perhaps one of the most exciting preseasons’ in all of sports, MLB Spring Training draws in thousands of fans to Arizona and Florida where they can watch their favorite teams gearing up for the season. Beginning in February and going well into April, spring training gives fans a sneak peak into potential line ups for the season. Starting the first Sunday of April and going through the first Sunday of October, the MLB regular season lasts for exactly 162 games per team. The games consist of 19 interdivisional games with each of their four division rivals, and the remaining games are divided out as series amongst the remaining ten teams. As October nears the top ten teams are set to face off in an elimination style playoff tournament ending with the World Series.

Just after the halfway point of the season, the league takes a four-day break during which they host the MLB All-Star game. Designated as a friendly exhibition game, a team of top players representing the National League and a team representing the American League face off on the field. The game not only provides a break for the players not participating, but it also provides fans with the chance to see the top players in the league all on one field! The weekend long event features the celebrity all-star game, the Home Run Derby, and the actual All-Star game.

Cheap tickets to premier MLB events, like the World Series and the MLB All-Star Game, sell out quickly as fans scramble to secure their seats. Don't miss out on your chance! Grab your glove and head to a game, you never know when a fly ball will head your way!

The 2020 MLB post season schedule includes 16 teams with Wild Card games consisting of 3-game series at the home ballparks of the teams that made it in. From their home playing field games, the winners are planned to move on to four "bubble" cities and ballparks in San Diego and Los Angeles California for the American League and Houston and Arlington Texas for the National League Division Series games. San Diego's Minute Maid Park is set to host the ACLS and Arlington's Globe Life Field, the NLCS. The World Series will also be played at Globe Life Field in Arlington, Texas. The World Series came down to the Tampa Bay Rays vs Los Angeles Dodgers, with the Dodgers winning the series in game six.

The schedule for the 2021 MLB season is packed with exciting rivalries! Find out when your favorite team is headed to a city near you or when the top MLB teams play each other for some guaranteed good baseball. Search tickets to watch the best baseball games of the year live! MLB 2021 regular season tickets are on sale now.

October baseball is here and the matchups are set! After two very intense wild card games, the Red Sox beat the Yankees and the Dodgers defeated the Cardinals to advance to the American League Division Series and National League Division Series respectively. The 2021 MLB postseason includes the best teams in the league as well as some all-star players who are ready to make their postseason statement. MLB 2021 postseason tickets are available for all the matchups, fans are ready to see October baseball again.

The MLB Opening Day schedules were released with Major League Baseball's opening day beginning on April 7th, 2022, rather than the original March 31st date scheduled prior to the 2022 MLB lockout. Spring Training began in mid-March. The 2022 MLB season will begin with the legendary MLB rivalry of the Red Sox at Yankees. That bats at Wrigley Field get crackin' on April 7th as well with Brewers vs. Cubs. Opening Day is headlined by Reds vs. Braves. Opening Day tickets are on sale now. The MLB 2022 regular season will run three days later than originally planned, with the final MLB regular season games being played on October 5th. More double-headers will be played in 2022 with the week delay to the beginning of the season.

Fans are back in the stands for MLB Spring Training and the MLB 2022 season! Most teams already have home tickets available as the season approaches. Stay tuned for more updates from the rest of the MLB teams!

When is the MLB All Star Game?

MLB is back with their annual MLB All Star Game on July 19, 2022 this season. Dodger Stadium in Los Angeles will host the all-star weekend and the game. The game will have the top players and coaches from the American and National league hitting home runs, stealing bases and putting on a show for fans. Tickets are available now.

How much are MLB tickets?

Tickets to watch MLB games live vary depending on the teams playing, the location of the game and day of week the game occurs. CheapTickets has MLB tickets for every team available before the season starts. Check the schedule to see when your favorite team plays another top team.