Please check back in the future for Radio City Rockettes event tickets. 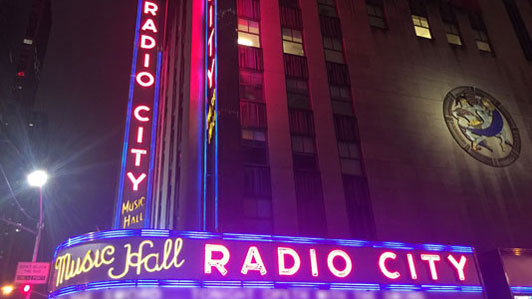 Dazzling Dancers that Captivated a Country

Originally started in 1925 in St. Louis, the Rockettes quickly caught national attention with their precision dancing routine. They relocated to New York City and performed at the opening night of the Radio City Music Hall in 1932. They also put on the first Radio City Christmas Spectacular that year, performing the very first "Parade of the Wooden Soldiers" dance – a legacy that's been passed on to every Rockettes troupe for more than 80 years! The Radio City Rockettes also perform during the Macy's Thanksgiving Day Parade, showing off the eye-high kick that they are famous for! The New York City Rockettes seem to move in perfect unison, the result of disciplined training and a very rigorous height requirement. Recently the Rockettes debuted the New York Spectacular, a dazzling show to entertain visitors during the summer season as well.

The Rockettes are back again with the holiday season. After celebrating Pride Month in New York with a performance, the Rockettes were able to indulge in a brief break, with the summer being an off season for the team. But before they knew it, they were getting back into the holiday season mode. Six weeks leading up to their first performance, they performed six hours a day for six days a week. Their hard work and dedication do not go unnoticed as they attain near to perfection during their classic shows. Their first show kicked off on November 8th, with various times ranging from 10:30am through 10pm until their curtain call on January 5th. In December they perform daily, allowing fans to have multiple chances to grab tickets. See their dazzling costumes matched with their sparkling personalities that steal the stage.

These incredible women are more than just teammates. 36 women are constantly learning and growing together. With precise movements, formation changes, and of course those classic high kicks, the support goes beyond just the rehearsal space and stage. Although the holiday season tends to be pretty hectic for these ladies, they are there for each other year-round. Between being roommates, confidantes, shopping buddies, and best friends, the close relationships translate to the stage. Individual personalities shine through, while simultaneously performing as one united front. What audience members see on stage is a cumulation of more than just dedicated rehearsals, it’s the tight knit family that contributes to making the fantastic shows what they are.