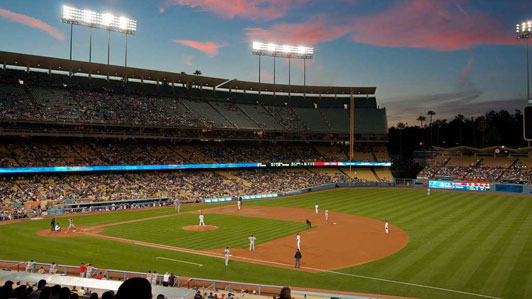 The Los Angeles Dodgers are one of Major League Baseball’s most historic franchises. The team’s infamous move from Brooklyn to the west coast in 1957 brought a new era of baseball to the city of Los Angeles, and one that has been very successful. Dodger greats like Sandy Koufax and Orel Hershiser legitimized the LA baseball culture and helped create the passionate fanbase that still exists today. The Dodgers are famously known for employing the league’s first African American baseball player—Jackie Robinson.

The Dodgers have been very successful over the past decade and come out every season with the same high success expectation. Every season, the Dodgers are expected to go far into post season ever year and the 2023 season is no exception. The franchise once again made key roster changes before and during this season that will hopefully bring them to the World Series in 2023. Secure your cheap Dodgers 2023 tickets to see Champs the next time they take the field.

CheapTickets’ vast ticket inventory gives fans the flexibility to choose an experience best suitable for them. Whether you are looking for prime foul-ball territory, or seats shaded from the LA sun, our selection offers a wide variety of seats for all Dodger game tickets! Contact us by phone or email to receive personalized order assistance, or simply follow the steps below to complete your purchase online today for cheap Dodgers tickets.

How Much Are Los Angeles Dodgers Tickets?

CheapTickets has an inventory of Dodgers tickets to accommodate every type of fan experience. We offer a large selection of affordable seats all throughout the stadium, as well exclusive seating at competitive market prices. You can get $11 Dodgers tickets now for the 2023 season.

Where Can I Get the Cheapest Los Angeles Dodgers Tickets?

There are constantly great deals being offered at CheapTickets. Prices will fluctuate based on a variety of factors such as inventory, opponent, and game day, so be sure to purchase your cheap Dodger tickets before they run out!

Spring training and regular season tickets are available now. The best day to get cheap Dodgers tickets for the 2023 season are Sundays. Sunday games at Dodger Stadium can be up to 30% cheaper than games on the other days of the week.

How Many Championships Do the Los Angeles Dodgers Have?

The Dodgers have been one of the most dominant teams in baseball in the last decade with seven straight postseason appearances, including two trips to the World Series. Although they haven’t been able to bring home a championship in recent years, the franchise still ranks 6th in the league with six World Series titles and 20 World Series appearances. The Dodgers show no signs of slowing down for playoff contention in 2023.

Who Are the Biggest Rivals of the Los Angeles Dodgers?

The Dodgers have a longstanding rivalry with fellow California franchise San Francisco Giants. Both teams originated from the East Coast, where the Dodgers and Giants were housed in New York until the 1957 season. Like the Dodgers, the Giants boast 20 World Series appearances but have seen more success in recent years with championship wins in 2010, 2012, and 2014. Don’t miss out on one of the fiercest rivalries in baseball and get your LA Dodgers tickets today!

Are the Dodgers selling tickets?

Dodgers game tickets are available for the 2023 season. Dodger Stadium welcomes back fans to the stands for the new MLB season, get tickets before they sell out.