Live events
More travel
Event Tickets Support
Resale prices may be above or below face value.
Seattle, WA
All Locations Current Location   loading...
You have disabled location tracking in your browser. Please enable it or enter your location below.
All Dates
From
To
Pick Dates Today This Weekend This Month All Dates 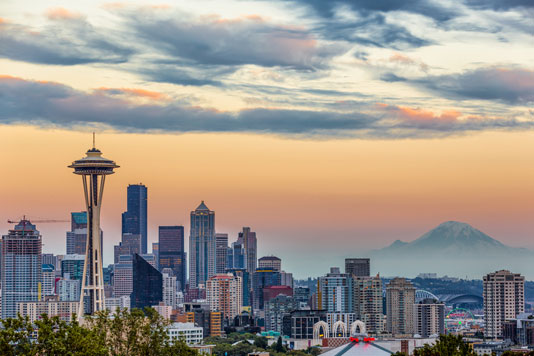 As the sports and cultural capital of the American Northwest, Seattle delivers action on every corner. Whether you're looking to catch a great deal on a Seattle Mariners ticket or you want to see the latest shows in Seattle this weekend, finding fun weekday and weekend events in Seattle is a breeze.

As the home of three professional men's sports leagues, Seattle makes watching a game easy. Visit the Seahawks' CenturyLink Field for an afternoon or evening football game. They actually share CenturyLink Field with Seattle Sounders FC, a professional soccer team that plays throughout the spring and summer. And Safeco Field, home of the MLB powerhouse the Mariners, has some of the best views of the downtown area. So pick up some affordable Seattle Mariners tickets on CheapTickets and go enjoy those views (and the game, obviously).

When you search for great Friday Seattle events, make sure you check out Benaroya Hall. This magnificent venue – complete with two auditoria and an architecture award for its great glass facade – is the home of the century-old Seattle Symphony Orchestra.

If you buy theatre tickets in Seattle, they're probably for the famed 5th Avenue Theatre, the city's best venue for musical theater. Or consider choosing a performance held at McCaw Hall. This performance venue is the home of the Seattle Opera and the Pacific Northwest Ballet.

Be sure to get Seattle concert tickets while in town. And keep your eyes peeled for events held at Paramount Theatre, a stunner of a historic venue that hosts everyone from Sigur Ros to The Beach Boys. If you aren't sure what to do, CheapTickets has a list of events going on in Seattle this weekend.

Seattle first became Seattle around 1853 which, according to official paperwork, is the first time that name appeared. And it didn't survive in that form for very long — after the Great Seattle Fire of 1889, the city was rebuilt, and many of those grand brick and log structures are still standing today. Among the many buildings in this city on the National Register of Historic Places are opulent theaters like 5th Avenue Theatre and Paramount Theatre, which stand as gilded testaments to the city's glorious past. But more modern monuments like KeyArena and the Chihuly Garden and Glass are worth a look, too, and have helped shape the diverse cultural landscape of this beautiful city by the sea.

Today, Seattle is still the economic hub of the Pacific Northwest. The annual Seattle events calendar draws all types of people, from sports fans to theatre and arts aficionados.

Did you know these facts about Seattle?

Things to do in Seattle

The annual National Poetry Slam is a must-see event for lovers of the spoken word. Amateur poets and professionals come together to outshine each other with poetry.

In July and August, you can watch the Seafair events on the Puget Sound. These events include the fierce competition of the Seafair Cup races, which involve custom-built hydroplanes. The Bon Odori celebration involves food and fanfare and lasts well into the night.

Consider a ticket for Seattle's Pier 57, where visitors can hop onto the Seattle Great Wheel, one of the largest Ferris wheels in the country.