Live events
More travel
Event Tickets Support
Resale prices may be above or below face value.
Atlanta, GA
All Locations Current Location   loading...
You have disabled location tracking in your browser. Please enable it or enter your location below.
All Dates
From
To
Pick Dates Today This Weekend This Month All Dates 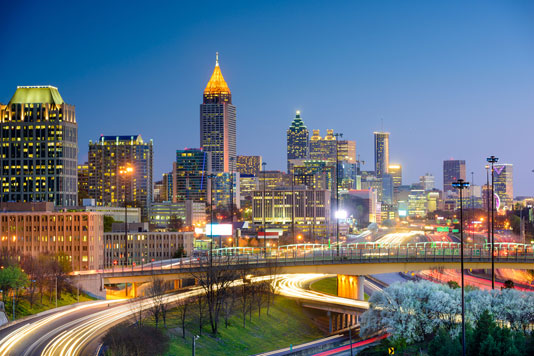 The Atlanta events calendar is filled with exciting things to do, whether you're looking for Atlanta concerts or other entertaining events. Are you a sports fan? You'll want to score Atlanta Braves tickets so that you can watch the team play at Turner Field. Atlanta's football team, the Falcons, have a brand-new venue, the Mercedes-Benz Stadium, located right in the heart of downtown. If you're a basketball lover, you can get Atlanta event tickets for the Philips Arena just a few blocks away to watch the Atlanta Hawks or the Atlanta Dream play.

The Big Peach is a city that loves music, so there are always upcoming concerts in Atlanta. Take in concerts in Atlanta this weekend with tickets for intimate venues like the Vinyl or Smith's Olde Bar. Nationally known artists regularly play at the Philips Arena, the Lakewood Amphitheatre and The Fox Theatre.

Theatrical Atlanta events take place practically every night of the week at venues like The Fox Theatre, the Alliance Theater, 7 Stages and the Horizon Theatre Company. In the mood to belly laugh? Check out the Punchline Comedy Club or the Laughing Skull Lounge. If you love amusement parks, stock up on Six Flags Atlanta tickets to take the whole family out for a spin.

In 1836, Georgia's General Assembly voted to construct a railroad to connect Savannah with the Midwest. The line's first stake was hammered into what is now Peachtree Street in the middle of Atlanta's Five Points district. The new community was named "Atlantica-Pacifica," but this was soon shortened to "Atlanta."

Today, Atlanta is a center for culture. With a diverse economy and a population close to half a million, the Big Peach is one of the most influential cities in the United States—so the Atlanta calendar of events is always packed.

Did you know these facts about Atlanta?

Things to do in Atlanta

The Atlanta Dogwood Festival features a juried art competition, a fine arts market and a host of musical performances.

Every September, Music Midtown brings some of the biggest names in contemporary music to Piedmont Park. In 2015, the lineup included Jack White, Eminem and Lorde.

Atlanta Streets Alive closes off some of the city's busiest streets throughout the year so people can bicycle, roller skate, jog and break dance.