Live events
More travel
Event Tickets Support
Resale prices may be above or below face value.
Toronto, ON
All Locations Current Location   loading...
You have disabled location tracking in your browser. Please enable it or enter your location below.
All Dates
From
To
Pick Dates Today This Weekend This Month All Dates 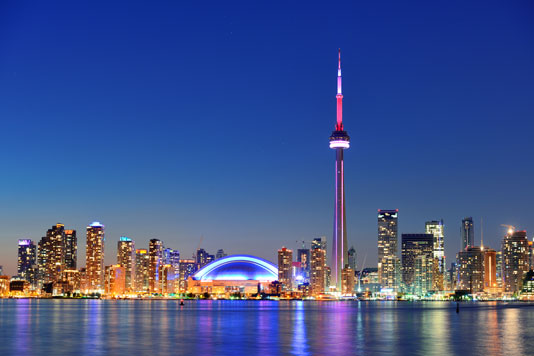 The streets of Toronto play host to a colorful variety of events and festivals throughout the year. Whether you love to check out live jazz, cheering on the Blue Jays with Rogers Centre tickets, or being first in line for Toronto theater tickets, the options are nearly endless.

Name any old sport and Toronto has it covered. Spanning baseball, basketball, hockey and soccer, some of the favorite local teams include the Toronto Argonauts (Canadian Football League), Toronto Maple Leafs (National Hockey League), Toronto Marlies (American Hockey League), Toronto Raptors (National Basketball Association) and the Toronto Rock (National Lacrosse League). They face their fearsome opponents at venues like the BMO Field, the Air Canada Center and Ricoh Coliseum — so why not catch a match in this bustling city with our great value Toronto event tickets?

If sports aren't your thing, downtown Toronto houses concert halls, theaters and gig venues where the latest shows and performances light up stages. The Roy Thomson Hall is the setting for the city's symphony orchestra, plus the Toronto Mendelssohn Choir, while the Royal Alexandra Theatre is a National Historic Landmark that welcomes plays and popular musicals. Toronto weekend events may be plentiful, but weeknights can be as jam-packed as you'd like them to be as well, so no matter when you stop in for a visit there's always something to do.

For example: Want to have a good laugh? Some of the best comedy clubs in town include Comedy Bar, Yuk Yuk's, Absolute Comedy and Bad Dog Theatre, so wander that way in search for a hearty guffaw and maybe even a beer or two.

Whether you are looking for concert tickets, Toronto Maple Leafs tickets or a play that catches your eye, CheapTickets offers the best events in Toronto.

While the Ontario area has been settled for roughly 12,500 years, the true hustle and bustle didn't begin until 1750 when European settlers – specifically the French – created a trading fort. And the city has grown into one of international importance since then.

Over time, the five former cities of Toronto, North York, Scarborough, York and Etobicoke have merged together to form the current metropolis we call 'Toronto' today. Transport networks keep it connected with its neighbors, creating a hub of world finance. With many vibrant communities thriving within Toronto's diverse districts, the Toronto events calendar has loads of eclectic and mainstream cultural offerings — certainly enough to fill a trip itinerary or 12.

Toronto's layers of heritage are visible when you contrast the striking modern buildings with historic beauties like the Gooderham Building. North America's fourth-largest city still has glimmers of European influence at its core.

Did you know these facts about Toronto events?

Annual events like these have loyal followings, attracting both locals and travelers in Toronto. Lovers of the silver screen should time a trip with the International Film Festival in September to see hot new releases from up-and-coming talent — they can hopefully do some star-spotting too.

Meanwhile, fans of all things Christmas can pick up cute gifts and decorations at the Toronto Christmas Market, which is inspired by the markets of Europe.

Fancy seeing some upcoming events in Toronto, Canada? Use our search tool to find the best deals on Toronto event tickets, see Toronto concert listings and obtain entrance to some of the city's biggest venues with BMO Field tickets or Elgin and Winter Garden Theatre tickets.