Please check back in the future for Jurassic World event tickets. 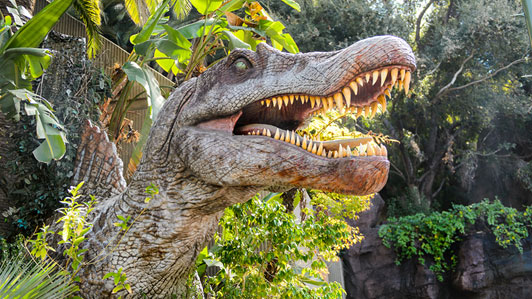 Come face to face with some of the most treacherous dinosaurs to walk the earth in the new stage production of Jurassic World! With unexpected twists and endless thrills, this show is sure to entertain adults and children of all ages. Head to an arena near you today for a once in a lifetime experience, order your cheap Jurassic World tour tickets today!

The Jurassic World Tour is a live stage show bringing the classic story of Jurassic Park to the big stage! The two-hour long show is based loosely around the hit blockbuster film Jurassic Park, adding much more to the relationship between humans and the prehistoric creatures. The show kicks off with an unexpected, chaos ridden trip to Isla Nublar. With the dinosaurs suddenly running loose in the park, it is up to the scientists to restore peace within the prehistoric park. Throughout the show appearances are made by some of the most notable dinosaurs, including Triceratops, Tyrannosaurus Rexes, and Raptors!

Audiences around the world can get up close and personal with life-sized dinosaurs with the new Jurassic World Tour! Stopping at arenas all over the world, anyone can be a part of this action packed, adrenaline filled show. The tour looped its way throughout the United States from September to April with stops in Pittsburgh, Detroit, Nashville, Boston, and Miami.

Join along with the expansive cast as they work to save the dinosaurs from an unfortunate fate. Get your cheap Jurassic World tickets today!

How Much Are Jurassic World Tickets?

How Long is the Jurassic World Tour Show?

The Jurassic World show lasts just under two hours. There is a brief intermission around the halfway point of the show allowing audience members to get up and move around.