Live events
More travel
Event Tickets Support
Resale prices may be above or below face value.
Austin, TX
All Locations Current Location   loading...
You have disabled location tracking in your browser. Please enable it or enter your location below.
All Dates
From
To
Pick Dates Today This Weekend This Month All Dates 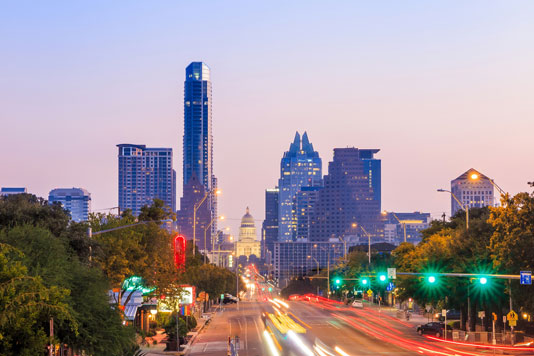 If you're new to the Austin experience, expect welcoming locals, an inviting atmosphere and a healthy dose of quirkiness. There are many Austin events and concerts occurring year-round, so make sure you don't miss the city's myriad of exciting entertainment options.

The University of Texas provides local sports fans with their dose of athletic events in Austin. When in town, try to catch the UT athletes as they compete in football, baseball, basketball and more.

There are many cultural events in Austin, and many of them occur at the local movie theater, Alamo Drafthouse. This hub of creativity is a local staple, hosting film festivals and other Austin concerts throughout the year. If you're in the mood for theater, try the Long Center for the Performing Arts. This venue offers many events throughout the year, ranging from opera to symphony musicians. For innovative theater, try the ZACH. Check out the theater's Austin event calendar, which includes special performances and celebrity talks.

The largest venue in the city is the Frank Erwin Center. This arena has hosted many concerts in Austin, including headlining acts like Fleetwood Mac and the Black Keys.

If it's laughter you're after, try The New Movement, which offers some of the funniest events in Austin, TX. Also, check out Esther's Follies, The Hideout Theatre and Cap City Comedy Club.

Before embarking on your next trip to this unique city, make sure to check online for Austin event tickets.

Texas became a part of the U.S. in 1845, and Waterloo was eventually renamed after Stephen Austin, the "Father of Texas." After the Depression, Austin's economy prospered, and the area attracted more and more modern amenities like movie theaters, plus a professional baseball team. The city became a center of technology by the 1950s and began to take on a new life as a musical hub in the 1970s thanks to musicians like Willie Nelson. Now, on any given night, scores of talented artists can be heard playing all kinds of musical styles throughout the city's numerous nightclubs and concert halls.

Did you know these facts about Austin?

Things to do in Austin

Interested in the Austin Film Society? Look no further than the Marchesa Hall and Theatre, a great resource for any aspiring film buff. The most famous of Austin's annual festivals is South by Southwest, one of the largest musical festivals in the world. Sports fans should check out the Formula One World Championship, which are held every year in November.