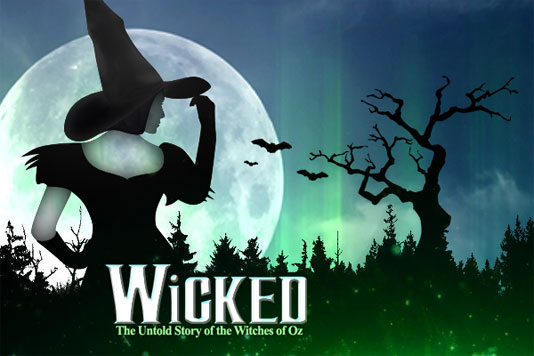 Wicked tells the origin stories of The Good Witch of the North and the Wicked Witch of the West. It's an exciting tale of friendship found and lost, and has some of the best Broadway music from the past decade. Don't miss out on this amazing show! Grab your cheap Wicked tickets today!

Fittingly, the Gershwin Theatre is now best known as the home to Wicked: The Untold Story of the Witches of Oz, which opened in 2003. Wicked earned over $3 million in one week in 2013, which was the highest gross income of a Broadway show up until that point in time. The Gershwin Theatre, opened in 1972 as the Uris Theatre - named after the company that developed the building - was renamed the Gershwin Theatre in 1983 during the 37th Tony Awards. The new name is meant to honor George and Ira Gershwin, brothers who composed pieces for orchestras, operas and, of course, Broadway musicals. The building has the largest capacity of any Broadway theatre at 1,933 seats. It was designed in Art Nouveau style by Ralph Alswang, who also produced films and plays.

It is part of the Paramount Plaza building, which is a 48-story skyscraper and the 46th tallest building in New York City. Before it was built in 1970, the space was home to the Capitol Theatre, an early movie house that famously played The Wizard of Oz for the first time in New York City.