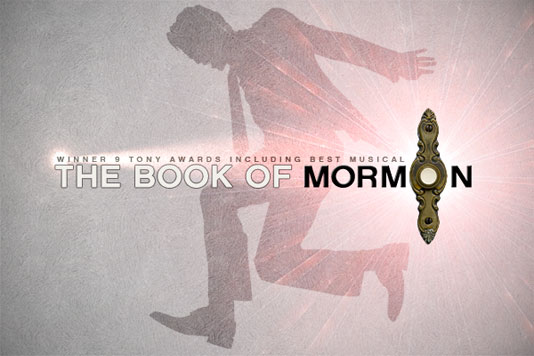 The Book of Mormon follows the work of two young Mormon missionaries in Uganda, Africa, as they grapple with the realities and hardships of life in an impoverished nation stricken by AIDS. The play explores themes of organized religion, doubt, hardship and extreme poverty, and serves as a critique of certain aspects of religious doctrine without discrediting the good that religion can achieve. Co-creator Matt Stone explained that, for him at least, The Book of Mormon is "an atheist's love letter to religion."

The Book of Mormon, the controversial and hilarious satirical musical created by the writing duo behind TV's South Park - Trey Parker and Matt Stone, is currently showing at The Eugene O'Neill Theatre. The play has been a phenomenal success, having received 9 Tony Awards and 14 nominations in total. The play also secured a new box office record for the Eugene O'Neill Theatre, making well over $2 million from just 9 productions in 2013.

Broadway's famed Eugene O'Neill Theatre traces its illustrious history back to 1925, when it first opened its doors as the Forrest Theatre. A Georgian-style building, the venue was designed to seat a maximum capacity of 1,200 audience members, and in the ensuing years the stage hosted a number of musical theater and dramatic productions. The theater underwent a transition in the year 1945, after it was renamed the Coronet. A second and final name change occurred in 1959, when the venue became the Eugene O'Neill Theatre - after the renowned playwright, who is widely regarded as one of America's finest. The name change was embraced after O'Neill passed away in 1953.