Please check back in the future for Cheyenne Frontier Days event tickets. 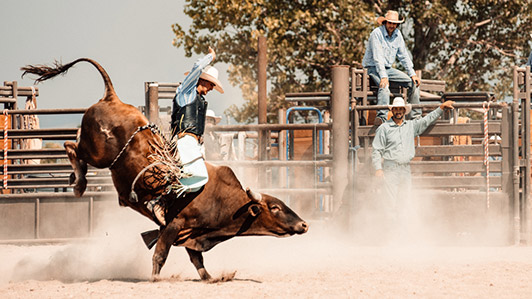 Dubbed as the “World’s Largest Outdoor Rodeo and Western Celebration”, the Cheyenne Frontier Days is one of the most exciting events of the summer. With everything from a fully sanctioned rodeo, fair rides, and live performances by some of the biggest names in music, there is something for everyone. Be a part of all the festivities, get your cheap Cheyenne Frontier Days tickets today before they are gone!

A Step into the Frontier

The Cheyenne Frontier Days got its start back in 1897 when a railroad traveling agent suggested the town host a festival based around the Greeley, Colorado “Potato Day”. Starting originally as a pony racing and bronco busting show, the inaugural event became an instant success. As years went on the event began expanding to eventually become what it is today. While the fully sanctioned rodeo is the main attraction for many attending the festivities, there are also live performances, a fair, vendors, as well as makeshift saloons and Native American villages to really transport guests back in time. The fun doesn’t just limit itself within the grounds of the event. Around the town local businesses open their doors as a celebration of the town’s past.

More Than a Rodeo

As the Cheyenne Frontier Days began to gain more popularity they began to expand to far beyond just a rodeo. Throughout the ten-night festival those in attendance can get a chance to see some of the top artists in the world take the stage to perform. Some of the more notable performers that have been featured at the event include Johnny Cash, Garth Brooks, The Doobie Brothers, Kenny Chesney, Luke Bryan and most recently Nickelback.

Throw on your cowboy hat and take a step back in time to the wild American west. Get your cheap Cheyenne Frontier Days tickets now!