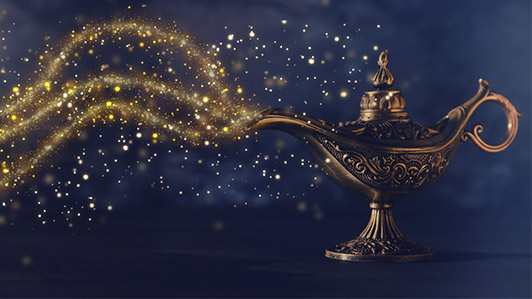 This family friendly show has made it to the New Amsterdam Theater on West 42nd Street in New York City! Based on the 1992 Disney animated film, it is sure to enchant fans of all ages. If you're looking for spectacle of comedy, magic and tunes you'll be humming to yourself for days, buy tickets for Aladdin next time you're in New York.

Aladdin on Broadway tells the familiar tale of the charming street urchin Aladdin and the magic lamp he stumbles across. When Aladdin rubs the lamp by accident, he releases a Genie who promises him three wishes. The rest of the Aladdin musical is a colorful and humorous retelling of the ancient story of just how unexpectedly those wishes play out. It's a whole new world that critics and audiences alike hail as "pure genie-us!"

Aladdin has been a perennial crowd-pleaser since its opening night on March 14, 2014. The Aladdin Broadway show uses songs from the original collaboration between composer Alan Menken and lyricist Howard Ashman that never made it into the Disney movie. The show is directed and choreographed by the Tony Award-winning impresario Casey Nicholaw, who first captured Broadway's heart when he helmed the musical The Book of Mormon. Aladdin theatre tickets are some of the hottest tickets on Broadway, and you can purchase tickets for any seat in the house right here on CheapTickets.

Not in New York? No problem! Aladdin began their North American Tour in April 2019. This tour welcomed plenty of stars including Kaena Kekoa, Reggie De Leon, and Ben Chavez. Cities on this tour included Providence, RI, Baltimore, MD, Austin, TX and more. Be sure to grab your tickets when this fantastic show comes to a city near you!

Did You Know These Aladdin Facts?

How Much are Tickets for Aladdin?

How Can I Get Cheap Aladdin Tickets?

How Long is Aladdin the Musical?

Aladdin the Musical can last approximately 2 hours and 30 minutes. Be sure to keep this in mind when purchasing your tickets! You can find the full updated schedule of Aladdin here on CheapTickets and find the show and tickets that fits right for your time.