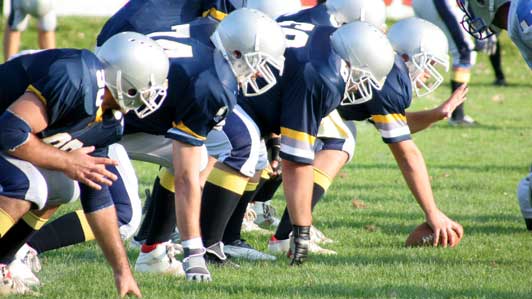 The Chicago Bears–Green Bay Packers rivalry may not be the longest running rivalry in the league (thanks to the 1982 strike-shortened NFL season), however it is the league’s most played. The two teams have faced each other in 192 regular season games, and 2 post-season games. This is because both teams are members of the NFC North Division, which pits them against each other for divisional supremacy.

These two teams collectively have won 5 Super Bowl Championships, 22 NFL championships and have 65 players in the Pro Football Hall of Fame. The Bears–Packers rivalry began in 1921 and since then has produced some of the greatest moments in NFL history.

A History Making Brawl – During a Bears–Packers game on November 23, 1924, the first ever ejection of players during an NFL game took place. The Packers’ Tillie Voss and Bears’ Frank Hanny were ejected from the game before the end of the first half due to trash talking and some thrown punches.

December 18, 2016 & the Windy City – One of the coldest football games in the league’s history was played on this day at Soldier Field in Chicago, Illinois. At halftime, both teams were tied at 10-10. In the third quarter, the Packers added 17 points and it was 27-10 at the end of the third. In the fourth quarter, the Bears surged and brought their NFC North rivals within 3 points and in striking distance of the Green Bay end zone. However, the Packers defense held its ground and the Bears had to settle with a field goal. When the Packers offense lined up, QB Aaron Rodgers completed a 60-yard pass to Jordy Nelson, which led to a Packers field goal as the clock ran out. It was also Rodgers’ longest completion of the season. The Packers won the game 30-27.

This rivalry is unique as it is equally balanced, which reflects in their regular and post-season games statistics. Here is how the Chicago Bears have performed against the Green Bay Packers.

In the post-season, the two teams have met twice, with each team winning one game.

The Bears have 34 hall of famers, while the Packers have 31 in the Pro Football Hall of Fame.

Mike Ditka – Ditka was the first tight end inducted into the Pro Football Hall of Fame. He was a fearsome blocker and an excellent pass catcher.

Doug Atkins – Arguably the best defensive end in the league’s history. Atkins was known for using his size to his advantage.

Harold (Red) Grange – One of the defensive heroes of the 1933 NFL Championship Game, Grange also founded the AFL in 1926.

Brett Favre – Favre made a franchise record when he started 253 regular season games consecutively for the Packers.

Earl (Curly) Lambeau – He was the Packers founder, player and their first head coach. The Packers home, Lambeau Field, is named after him.