Live events
More travel
Event Tickets Support
Resale prices may be above or below face value.
Tampa, FL
All Locations Current Location   loading...
You have disabled location tracking in your browser. Please enable it or enter your location below.
All Dates
From
To
Pick Dates Today This Weekend This Month All Dates 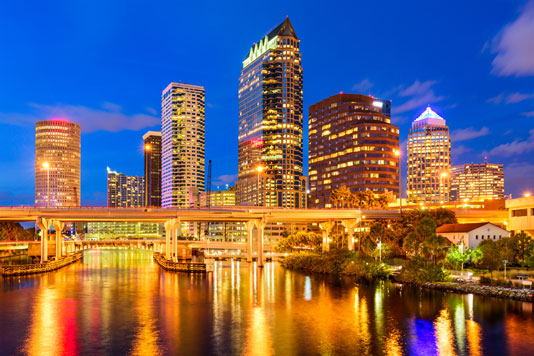 Tampa is a beautiful city located on Florida's scenic Gulf Coast. There are many things for people to see and do in this sunny metropolis. Prominent Tampa Bay sports teams include the Tampa Bay Lighting, the Tampa Bay Rays and the Tampa Bay Buccaneers. People can watch athletes from these beloved teams in action at established Tampa venues such as Raymond James Stadium, Steinbrenner Field, Amalie Arena and the University of South Florida Sun Dome.

As it turns out, Tampa's scenic Gulf Coast creates a beautiful backdrop for the world of professional sports — specifically, the Tampa Bay Lighting, the Tampa Bay Rays and the Tampa Bay Buccaneers. These world-class athletes flex their might in established Tampa venues like Raymond James Stadium, Steinbrenner Field, Amalie Arena and the University of South Florida Sun Dome.

Tampa is also a great destination for those who appreciate culture and arts. There's the historic Tampa Theatre in the Franklin Street Mall, and other noted arts and entertainment venues in Tampa such as the MidFlorida Credit Union Amphitheatre, the Orpheum, Skipper's Smokehouse and New World Brewery. The MidFlorida Credit Union Amphitheatre is a massive outdoor venue that's part of Live Nation. All of the above Tampa entertainment venues offer more than meets the eye, so make sure you check out their diverse rosters for something new and fun to experience!

Some of the city's best events are held at Tampa comedy clubs. Some widely known comedy spots in the city are the Improv Comedy Theater and the Tampa Bay Comedy Coconuts Comedy Club. Here, audiences can see renowned national standup comedians along with emerging comedic talents from the area.

Fans of music festivals can have a blast in Tampa. Tampa's Sunset Music Festival is a big spring electronic festival that takes place at Raymond James Stadium. Tampa's Gasparilla Music Festival is yet another big music event, which draws huge crowds to MacDill Park, Kiley Gardens and Curtis Hixton Park.

Tampa was first settled back in 1823. And surprisingly, the beaches weren't the major draw, even thenÃÂit was the United States Army's Fort Brooke, a frontier outpost. The area changed and grew quite quickly after that. Cigar manufacturing was a big part of Tampa's initial growth, but it would be easy to argue that today's biggest draw is the Buccaneers.

Did you know these facts about Tampa?

Things to do in Tampa

It doesn't matter if people are looking for Tampa Busch Gardens tickets, Tampa Bay forum events or Tampa weekend events in general. The city's venues and happenings are beyond fascinating. Some of the city's most acclaimed tourist draws include sports and concerts, so be sure to check out area arenas, amphitheaters and venues. Book your Tampa event tickets today!