Live events
More travel
Event Tickets Support
Resale prices may be above or below face value.
East Rutherford, NJ
All Locations Current Location   loading...
You have disabled location tracking in your browser. Please enable it or enter your location below.
All Dates
From
To
Pick Dates Today This Weekend This Month All Dates 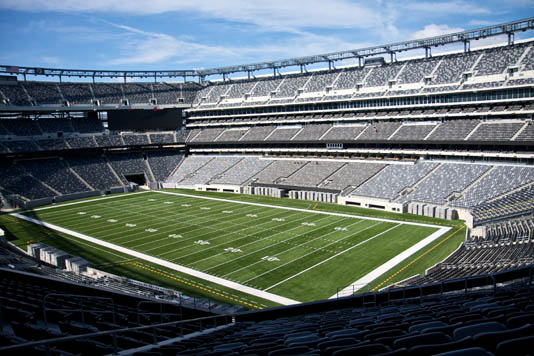 As home to the Meadowlands, East Rutherford has become a paradise for sports and entertainment fans. Whether you're hoping to score cheap tickets to a Taylor Swift concert or find the best spot in the bleachers for a Jets or Giants game, you can find your cheap East Rutherford NJ tickets here!

Cheap concert and theater tickets
While the MetLife Stadium is typically used for sporting events, it also serves as the host for the biggest names in music as they tour the country. Nothing beats the atmosphere of thousands of fans packed in the bleachers, singing along to radio hits. From Kenny Chesney to Ed Sheeran, sensational concerts happen at the MetLife Stadium! In addition, the Meadowlands complex has ample space for special events like Cirque du Soleil.

Cheap sports tickets
The MetLife Stadium is hallowed ground for tens of thousands of NFL fans, as it is the proud host of both the New York Jets and the New York Giants. When the two teams play each other, devoted fans are quick to snatch up cheap tickets. The MetLife Stadium has also hosted the Super Bowl, WrestleMania, and international soccer matchups.

Sports fans and music fans alike have a lot to look forward to at the Meadowlands complex. Pick up your cheap East Rutherford NJ tickets today so you don't miss anything of these unforgettable experiences!