Live events
More travel
Event Tickets Support
Resale prices may be above or below face value.
Pittsburgh, PA
All Locations Current Location   loading...
You have disabled location tracking in your browser. Please enable it or enter your location below.
All Dates
From
To
Pick Dates Today This Weekend This Month All Dates 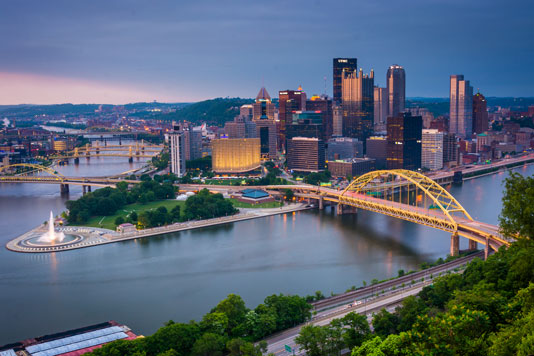 If you are visiting the Steel City of Pittsburgh, Pennsylvania, and are looking for something to do, you're in luck. You'll find a ton of fun activities on the Pittsburgh events calendar that you can enjoy throughout the city. Fortunately, there are various Pittsburgh shows, concerts and sporting events that you'll love as you explore the beautiful city any time of year.

Pittsburgh Pirates spring training tickets will soon be on sale if you intend to visit the city in 2017. The Pirates play in the PNC Park, which accommodates a head-spinning 38,362 Pirates fans.

If the baseball diamond isn't for you, you can also purchase a pair of Pittsburgh Penguin tickets for a game that will keep you entertained at the hockey team's new home at the Consol Energy Center.

The city of Pittsburgh as we know it came into existence in 1758. Scottish general John Forbes named the city after the British Statesman William Pitt. After this period, the iron industry really took off, and the city became a major contributor to the Civil War effort, garnering the title "The Arsenal of Democracy."

The city also has a rich cultural history and a stunner of a skyline. Besides being home to Frank Lloyd Wright's Fallingwater, as well as plenty of old-world churches, Pittsburgh's arenas, of all things, feature a notable trend: Heinz Field and PNC Park are both designed to give fans a view of the skyline. It's also a seriously notable destination for theater lovers. Among the countless venues are the Pittsburgh Playhouse and Point Park University, where you can catch some talented locals.

Did you know these facts about Pittsburgh?

Things to do in Pittsburgh

For those who enjoy the performing arts, the First Niagara Pavilion and the Benedum Center are just two of the major places you should grab Pittsburgh event tickets for.

Modern art lovers will love Pittsburgh. It's home to the Andy Warhol Museum and the Carnegie Museum of Art, which are highly valued in the art world. Check the Pittsburgh event calendar to see if any art shows are going on while you're in town as well.

For those who want to enjoy the beauty of the natural world, Pittsburgh has the Phipps Conservatory, which has Pittsburgh events such as the Butterfly Forrest exhibition.