Please check back in the future for US Open Tennis Championship event tickets. 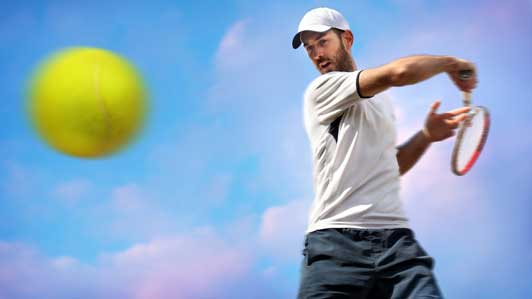 About US Open Tennis Championship

The U.S. Open is one of the biggest events that the sport of tennis has on American soil. You're surrounded by 20,000 boisterous fans who are excited they get to make some noise for their favorite sport and athletes. They will boo and cheer the umpire like they would at any other sporting event. The energy of the city can be felt buzzing around the stands once things get going, as many of the fans that attend are locals. It's a tennis event unlike any other. Get your U.S. Open tickets to be a part of this unique tennis experience today!

The U.S. Open began in 1881, though it was slightly different than it is today. Back then, it was played on lawn courts at the Newport Casino in Rhode Island and players competed to overthrow the previous year's winner, who automatically made it to final match. The U.S. Open grew to include women's singles events, men's and women's doubles and mixed double events by 1900 and started including night games as well. The tournament is run the same way today, although it was relocated to Flushing Meadows-Corona Park in Queens, New York and switched to hard courts. From 1881 to 1887, Richard Sears dominated the event, winning every year. But on the modern court, Jimmy Connors, Pete Sampras and Roger Federer all rule the men's court having won five titles each. On the women's court, Chris Evert and Serena Williams are the all-time champs with six wins each. The tennis stadium has been renamed the USTA Billie Jean King National Tennis Center to tribute the four-time tournament champ herself. The U.S. Open is held on the last Monday in August and continues two weeks into September every year.

Who can forget when the Williams sisters faced off in the 2001 Grand Slam singles final? It was the first final in a century to feature dueling siblings. Imagine how exciting it was for fans to have US Open tickets to a sibling rivalry like that. In 2012, fans were delighted when the tournament ran celebrity matches that included big names like Adam Sandler, Alec Baldwin and Katie Couric. Crowds at tennis matches are typically silent to help the players focus - but not the U.S. Open. The crowds are more rambunctious than other tennis spectators. And with that, the players have said they feel pressure to perform, as they really notice a difference in atmosphere at this tournament.

As the last Majors tournament of the year, you do not want to miss your chance to see tennis legends take the court for one final match. Order your cheap U.S. Open tickets today before they are gone!

How Much is a Ticket to the US Open Tennis?

How Do You Get US Open Tennis Tickets?

Does the US Open Sell Out?

The US Open does sell out often due to the high anticipation to see the game. Don’t miss your chance at seeing the game and reserve your spot at the US Open Tennis Championship. Get your cheap tickets on CheapTickets before they’re all sold out!