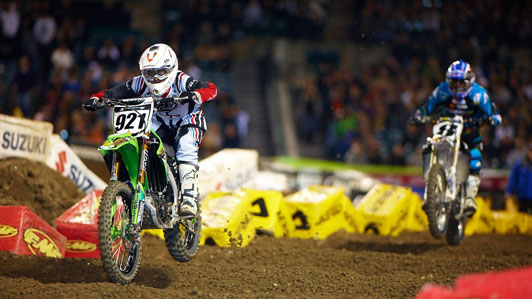 The Nitro Circus is a one-of-a-kind globally traveling spectacle starring Travis Pastrana and his crew of extreme sports performers, including a wide range of stunts ranging from dirtbike courses to base jumping, skating and even wheelchair sports.

The "action sports collective" as its been called by Pastrana first began its life as a reality television show that featured Travis and his crew performing a variety of dangerous stunts. It then spawned the traveling show, a second television show that followed the crews live adventures as the traveled the globe, as well as a 3D movie released in 2012.

The Nitro Circus has received wide acclaim for including both traditional extreme sports like BMX, skating and motocross and more left-of-center stunts including scooters and Frankenstein-like contraptions created by the group's crew.

Leader Travis Pastrana is already renowned in his career as a motorsports champion and stunt rider who's won several gold medals at the X-Games (the Super Bowl of extreme sports) and performing worldwide with his unique brand of skill and personality.

Pastrana brings his panache to this incredible live show that has to be seen to be believed— don't miss your chance to believe when it rolls through your town. Buy cheap tickets now!