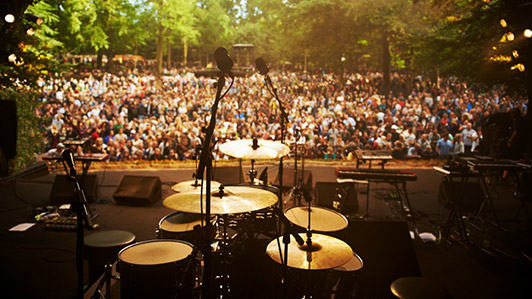 The Austin City Limits Music Festival (ACL) is one of the hottest music festivals of the year. With some of the biggest artists in the world taking the stage, fans from around the globe travel to see them live! Don’t miss out on your chance to see dozens of artists live, make sure to get your cheap Austin City Limits Festival tickets before they all sell out!

In past years of the festival, fans have gathered to see music legends such as Beck, OutKast, Lorde, Weezer, The Civil Wars, Ryan Adams, The Eagles, Pearl Jam, The Shins, and many more! 2021 was no exception to the rule, ACL brought some of the biggest names in music to the stage. The 2021 Austin City Limits lineup was announced just months before the shows began. Billie Eilish, Miley Cyrus, George Strait, Stevie Knicks and DaBaby were just the headliners announced. The festival all heard music from Jack Harlow, Megan Thee Stallion, Machine Gun Kelly and many more. The in-person festival will take place like in the past at Zilker Park, over two-weekends in October: October 1-3 and October 8-10, 2021.

Going to the Austin City Limits Festival isn't just about the great bands, of course. It's also about the people you meet there and the memories you make after the speakers have been turned off! Austin is a great city to explore when the festival become too much. Hurry to get your cheap Austin City Limits tickets today — it's definitely going to be a festival to remember!

How Do I Get Tickets to Austin City Limits?

Buying tickets to Austin City Limits has never been easier! CheapTickets has everything from full weekend passes, to individual day passes. Fans can choose from general admission tickets to even VIP passes. Browse through our selection today to find the perfect ACL festival ticket!

Does Austin City Limits Sell Out?

Typically, Austin City Limits does have a limited number of tickets available. Meaning that cheap tickets to the festival sell out within minutes of them going on sale. Don’t miss your chance to attend this once in a lifetime festival, order your tickets now!

Austin City Limits Festival Tour Schedule
Related Artists
Load More
© 2022, Trip Network, Inc, (d/b/a CheapTickets), An Expedia Group Company. All rights reserved. CheapTickets, CheapTickets.com, and the CheapTickets logo are either registered trademarks or trademarks of Trip Network, Inc. in the U.S. and/or other countries. Other logos or product and company names mentioned herein may be the property of their respective owners.