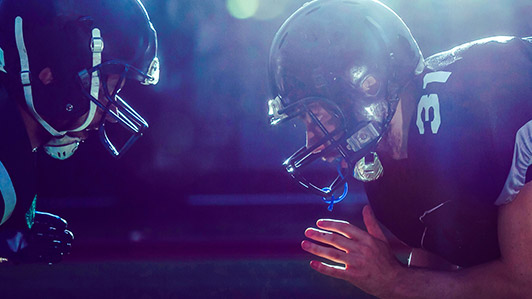 Football is a kick-off to fall, and football fans love spending their afternoons in the cool fall air, tailgating before games, decked out in their team's apparel, cheering on their team — and shouting at the refs! It's one of the most beloved sports in America, with passionate fans, dramatic turns of play, and a season that leads to the Super Bowl. NFL fans are dedicated to their teams and fill the stadiums eagerly. Teams like the Patriots, the Giants, the Saints, the Seahawks, the Steelers, the Jets, and dozens of others regularly play to sold-out crowds. Get your cheap NFL tickets here to get in on the action yourself!

What would eventually become known as the National Football League was formed in August of 1920 when a group of representatives from existing football teams gathered together with the intention of creating a league that would raise the standard for professional football. The league would become known as the American Professional Football Conference (APFC), and they started with fourteen teams. The first professional game of football was played on September 26, 1920 when the Rock Island Independents beat the St. Paul Ideals. After only two years of play the league made the unanimous decision to rename the league, becoming known as the National Football League (NFL).

Early on in the league the champion was determined by whoever had the best record at the end of the season. In 1932 there was a tie between the Chicago Bears and the Portsmouth Spartans, each finishing the season with six wins and one loss. As a tie breaker the league decided to hold an extra game where the winner would become the champion for the year. Due to the interesting circumstances surrounding the game, it received a lot of public attention. After the Chicago Bears won the 1932 championship, the league decided that they were going to split into two divisions and the champion for the league would be determined by a game between the two division champions.

From the 1930s to the 1950s there were several other leagues that came along trying to compete with the success of the NFL, however none of them were big enough to attract star recruits or lucrative deals with networks. In 1960 that all changed when the American Football League was founded. They began getting involved with bidding wars with the NFL, making it much harder for them to obtain star players coming out of college. They also were able to attract mainstream attention through broadcasting their games after landing deals with television networks. In 1966 it was announced that the two leagues would be merging together but would not be effective until the 1970 season. For the four years that they were in limbo before the merger the two had to share a draft and their championship games now became one. The new championship game became known as the Super Bowl, and it entailed the champion from each league playing against each other. In 1970 after the merger was in full effect, the two leagues became conferences under the common league. The National Football Conference (NFC) was all pre-merger NFL teams and the AFL teams became known as the American Football Conference (AFC).

When play first started in 1920, the league did not have a set number of games that had to be played within the season. In 1935 the NFL mandated that every team had to play twelve games every season, a number which would change several times over the years due to varying reasons. The current sixteen game model was adopted in 1978, although many are pushing for an increase to eighteen games. The teams that qualify for the playoffs are determined by conference champions as well as two wildcards from each conference. Each playoff match up is a single elimination game with the winner advancing to the next round until a team is ultimately crowned the Super Bowl Champion for the season.

Whether your team is lucky enough to play for the Vince Lombardi Trophy or you just want to see the two greatest teams of the season face off, you can get your cheap NFL tickets here today! Of course, the whole season leads up in anticipation to the Super Bowl. Cheap Super Bowl tickets are nearly impossible to find, so make sure to get yours here today. Even if you don't get to the Super Bowl, a regular season game is a great way to spend time with family, hang out with friends, even go on a date!

Millions of people watch football at home, but it's much more exciting to be in the stadium yourself, feeling the electricity of the fans and players. Kick-off the new football season right! Get cheap 2022 NFL tickets before the season starts to join thousands of others cheering for your favorite team! In 2021, the NFL started a 17-week season which means there are more chances to see your favorite or local team on the field. Get outside and see every touchdown, interception, TD celebration and more with your friends and family. The 2022 NFL season is an exciting time, search for your tickets before the games pass.

When can I buy NFL tickets?

You can buy NFL tickets anytime of the year right here at CheapTickets Events! Whether you are looking for some preseason action or post season intensity, we have tickets for every game of the season.

How much are tickets for NFL Games?

Prices for NFL game tickets vary based on several factors. Check out our selection of games for all the best NFL ticket deals!

What are the oldest NFL teams?

While the modern-day NFL did not start until 1922, the Chicago Bears and Arizona Cardinals date their existence back to 1920, making them the two oldest teams in the NFL. By the 1922 season the Green Bay Packers were also added into the mix, often being considered as one of the oldest teams in the NFL as well.

When was the first NFL Game?

The first NFL game was played on October 3, 1920 in Dayton, Ohio. The two teams facing off were the Dayton Triangles and the Columbus Panhandles.