Check out these upcoming events from Trans-Siberian Orchestra as the event you originally searched for is complete.

Please check back in the future for Trans-Siberian Orchestra event tickets. 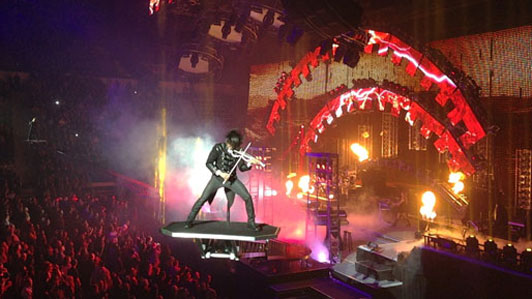 Trans-Siberian Orchestra, sometimes also called TSO, was formed in the mid-1990s as a progressive rock band by composer Paul O'Neill. Trans-Siberian Orchestra takes classical music and gives it a modern twist with powerful alternative rock reinterpretations. Some of their most popular albums have been of rock-versions of classic Christmas tunes, though their music is also influenced by current world events, from wars to social justice issues. The band follows up on their music by donating money from their concert ticket and album sales to philanthropic causes. TSO concerts have been some of the highest-attended concerts on the last couple decades, selling millions of tickets. With this kind of intense popularity and elaborate showmanship, cheap Trans-Siberian Orchestra concerts tickets disappear within minutes of their release, so don't wait to get your Trans-Siberian Orchestra tickets today!

Trans-Siberian Orchestra is celebrating the 20-year anniversary of their annual winter tour, based on the rockers' 1999 Ghosts of Christmas Eve TV movie. Kicking off Nov. 14 in Greenbay, WI and Council Bluffs and wrapping up Dec. 30 in Milwaukee and Cleveland, the show will visit 65 cities across America to deliver the group's signature multi-sensory holiday extravaganza. TSO's annual November-December multi-sensory show, which sells out venues year after year, has cemented the group's status as a must-attend, multi-generational, holiday tradition. This year's 20th anniversary tour, a presentation of TSO's unforgettable "The Ghosts Of Christmas Eve", featuring founder/composer/lyricist Paul O'Neill's timeless story of a runaway who finds her way into a mysterious abandoned theater.

Will the Trans-Siberian Orchestra Tour in 2022?

Everyone’s favorite wintertime show came back for the 2022 Holiday season. The shows started in November and continued until the end of the year. Find tickets to see Trans-Siberian Orchestra in 2022 near you.

Where Can I Find Discounted Trans-Siberian Orchestra Tickets?

Here at CheapTickets we have some of the best deals on cheap TSO tickets! Check out our selection today for your chance at seeing this iconic group live.

Are There More Than One Touring Trans-Siberian Orchestras?

TSO has two travelling orchestras during the holiday season allowing them to perform sometimes in two cities on a single night. Doing this allows them to spread more cheer and musical brilliance throughout the country!

How Long Does a Trans-Siberian Orchestra Show Last?

While the timeline for every show is subject to change, audiences can expect that the average Trans-Siberian Orchestra concert will last approximately 2.5 hours.

Does TSO Only Play Holiday Music?

No! While Trans-Siberian Orchestra is mainly known for their holiday shows and extensive holiday tours, that is not their only claim to fame. In the early 2000’s the hard rock opera band expanded into non holiday songs with their release of “Beethoven’s Last Night” and later “Night Castle” and “Letters from the Labyrinth”.