Check out these upcoming events from Monster Jam as the event you originally searched for is complete. 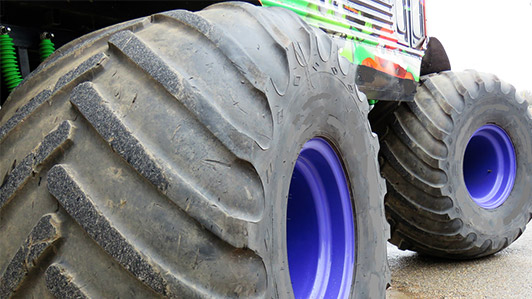 The Monster Jam is always one of the most exciting and thrilling events of the year, a must-attend show for anyone interested in cars and racing. The Monster Jam tour goes through the United States, Canada, and Europe, ending in Las Vegas, so get your Monster Jam tickets today for a show near you -- or start making plans to head to Las Vegas! Get up close and personal with both the drivers and the trucks at the Pit Party! See some of the world's most famous monster trucks -- including Max-DSM, Monster Mutt®, Grave Digger®, El Toro Loco®!

Truck drivers will show off both their racing and their freestyle skills, including donuts, wheelies, and ramp jumps over cars! Events for any given night include timed racing, two-wheeled skills challenges, donuts, head-to-head racing, and freestyle. Drivers are chosen based on a variety of different qualifications, including their ability to not only operate the massive vehicles, but also on how they interact with the fans. More recently Monster Jam has opened a “university” where they train individuals who are looking to become drivers on realistic tracks and obstacles. You can get to know the drivers of the monster trucks by getting a Monster Jam Pit Party ticket or attending one of the autograph sessions. The pit parties provide a great way for fans to not only interact with their favorite drivers, but also provides them with fun pre-show activities. Throughout the event, fans with smart devices can put their judging skills to the test. By logging in to the designated website provided via the in-show host, fans can vote on who they think should be taking home the prize. With voting in the hands of the audience, Monster Jam gives their fans the level of interaction that no other sporting event does! Buy your cheap Monster Jam tickets today and just remember -- don't try any of these stunts at home!

The season began as soon as the New Year, with the three Triple Threat Series. The East, West and Central all had their own series that ended in March. The touring season was then postponed due to unforeseen circumstances at the time and the Monster Jam World Finals 21 was cancelled.

The Triple Threat Series was still intense in 2020. Contestants who finished at the top in 2 Wheel Skills, ATV Racing, and the Speedster Obstacle Course earned the most points to move forward. Grave Digger (Brandon Vinson), EarthShaker (Tristan England), and Scooby-Doo! (Myranda Cozad) were some of the competitors in the Triple Threat Series.

Monster Jam is back!

Many 2020 Monster Jam events were rescheduled for 2021 after live events took a short break. Look at the schedule to find the Monster Jam event near you. Even if you've never been to a Monster Jam show before, take the chance on a unique experience! The Monster Jam will be one of the most raucous, exciting, one-of-a-kind events you've ever been to. Fan favorite trucks opened the shows back up as well as some new surprises that fans cannot stop talking about. Fans had many chances to catch a Monster Jam show in 2021, the tour went all over the country and did not have plans to stop. Get tickets to see one of the most intense outdoor live events!

The 30th anniversary celebration of Monster Jam started right as 2022 began. Minster Jam events are so frequent, they seem to be almost every weekend and even on some weeknights. There are dozens of events each month all over the country for the 30th season. From Salt Lake City and Oakland to Hartford and Pittsburgh, there are events spread all over the country in 2022. See the best truck event in Denver, Miami and even Green Bay, find out when Monster Jam goes to a city near you. Tickets for all 2022 shows are available now.

How Much are Monster Jam Tickets?

The average ticket price for a Monster Jam show in 2023 is $127, although fans can find tickets as low as $20 at CheapTickets.

How Can I Get Monster Jam Tickets?

Fans looking to attend a Monster Jam show can purchase their cheap tickets right here! Browse through our selection of cheap Monster Jam tickets now and find the perfect seat for all of the action.

Where are the Best Seats for Monster Jam?

For those fans that are looking to get up close and personal with the drivers and trucks, ground level seating is the best choice. For fans looking to still enjoy all of the excitement of the night but would prefer to not be as close to the loud truck motors, there are still great seats in the higher levels of the arena!