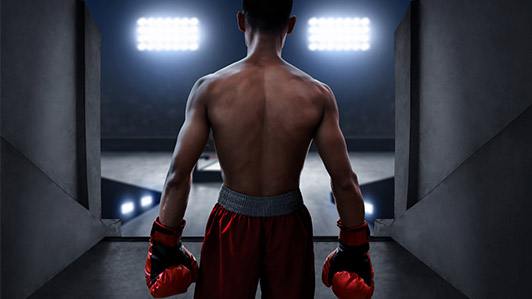 Boxing is one of the oldest and most intense sports played today. Boxers are some of the most dedicated and focused athletes, fighting man-to-man with just their fists. For spectators it's non-stop tension, waiting to see who will get the first hit in and if it will topple their opponent. Get your cheap boxing tickets here to secure your spot ringside! Boxing matches are electric places, full of energy and tension. A boxing round can end quickly with a quick and powerful hit by one of the boxers. Millions of people tune in to watch televised boxing matches, but it's nothing compared to being part of the buzzing crowd yourself! Some of the most popular boxing matches sell out quickly, so don't wait to get your cheap boxing tickets. Boxing is a historical sport with such legends as Muhammad Ali, Mike Tyson, Floyd Mayweather, Jr., Joe Louis, George Foreman, and many more! It started as a sport in the Olympics and has since grown to an international phenomenon. You can see impressive boxers in both professional and amateur matches, including at the amateur boxing World Championships! Find a boxing match near you and get in on the action — order your cheap boxing tickets here today!

– The Alamodome played host to the first boxing match with fans since March 2020, featuring Gervonta Davis and Leo Santa Cruz, fighting for the WBA Lightweight and WBA Super Featherweight titles. Next up was Canelo vs. Smith at The Alamodome – The WBA Super Middleweight Title decided on December 19, 2020 in San Antonio, Texas at the world-famous Alamodome. For Canelo's fight against the Ring super middleweight and WBA (Super) champion, Callum Smith, tickets were in even higher demand, with only a limited capacity allowed.

– AT&T / Cowboys stadium hosted a boxing match with spectators, with a headline card that featured Errol Spence Jr. and Danny Garcia. Errol "The Truth" Spence fighting to defend his welterweight world champion title in what was hailed as the biggest boxing match of the year. Cheap Spence/Garcia tickets went fast, so make sure to secure your boxing tickets at CheapTickets next time before they sell out.

– American Airlines Center in Dallas, TX hosted a New Year's 2021 battle, between Ryan Garcia and Luke Campbell. Undefeated Garcia stepped into the ring against a three loss fighter in Campbell and defeated Campbell via knockout. There were only a limited number of fans allowed in the arena to see the bout for the interim WBC lightweight title.

– The state-of-the-art, Dickies Arena, in Fort Worth, Texas hosted the Golden Boy Boxing Series bout between the up-and-coming welterweight star Vergil Ortiz Jr. and the experienced challenger and former world champion in Maurice Hooker on March 20, 2021. Ortiz remained undefeated when he took down Hooker in the seventh round. Get Golden Boy Promotions tickets at CheapTickets!

The title unification is complete with Canelo's defeat of Saunders at the beginning of the ninth round on May 8, 2021 in Arlington, Texas at AT&T Stadium in front of a crowd of 73,126. Boxing fans will be itching to see the Mexican superstars next bout. Stay tuned to CheapTickets for all the best boxing tickets.