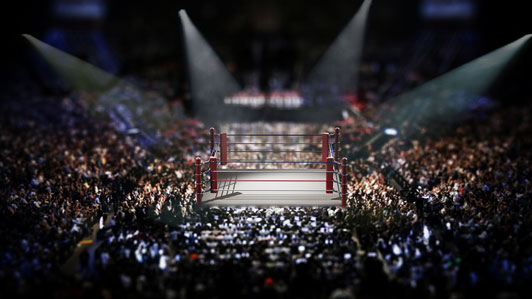 Wrestling has a long history in athletics, being one of the first Olympic games, but wrestling has seen a recent resurgence in popularity. Wrestling matches are some of the most watched TV events of today, drawing such big crowds that bars, clubs, and restaurants organize special events around them and charge extra covers. With the raw intensity that comes from the punches, pins, flips, and takedowns, it's easy to see why! Many of the biggest matches are televised, but why dish out for the pay-per-view fees when you can get cheap tickets to be at the fight yourself? You can get cheap wrestling tickets here and secure your spot ringside! Wrestling has always had a spot in the collegiate and amateur sports world, but it's exploded in popularity in recent years. Though sometimes controversial, fans passionately defend the pure adrenaline of the games. There are many different kinds of wrestling events, from tournaments to entertainment, and you can get wrestling competition tickets or WWE tickets here. It's best to get your tickets as soon as possible, as these wildly popular events sell out quickly. Diehard fans buy up cheap wrestling tickets quickly. See some of the most popular wrestlers, athletes like Jordan Burroughs, Jake Varner, Brie Bella, Big Show, and dozens of others! Be there to see the epic knock-outs! Get your cheap wrestling tickets today and be part of the action yourself!