Live events
More travel
Event Tickets Support
Resale prices may be above or below face value.
Chicago, IL
All Locations Current Location   loading...
You have disabled location tracking in your browser. Please enable it or enter your location below.
All Dates
From
To
Pick Dates Today This Weekend This Month All Dates 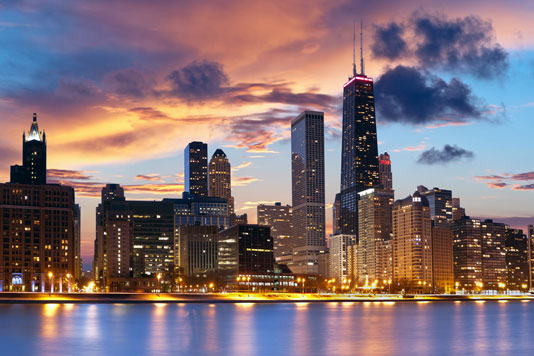 The largest metropolis in the Midwest, Chicago plays host to nearly countless events, parades and festivals throughout the year. The city is known for its killer music scene and improvisational comedy. So if you're in the mood for a little gut-busting, snag Chicago event tickets for known comedy venues like The Second City, Zanies Comedy Night Club or the Laugh Factory. And if a Broadway production or opera is more your speed, the Chicago Theatre, Oriental Theatre, Broadway Playhouse and Mercury Theater are top venues for special events in Chicago.

Whatever sport gets your heart racing, Chicago delivers all year-round. This Midwestern hotspot is home to Major League Baseball's Cubs and White Sox, the Chicago Bears of the NFL, the NHL's Blackhawks and the National Basketball Association's Chicago Bulls. They play at both classic and modernized stadiums, including Soldier Field, Wrigley Field and United Center, where you can use your Chicago Blackhawks tickets to root for the home team amid all the action.

Oh, and blues music and Chicago go hand in hand, and the House of Blues - Chicago is home to a variety of stellar music events in Chicago. If you love festivals, look no further than the annual Lollapalooza festival, where rap, rock, pop and so much more take the stage in Grant Park every summer.

Which means: Whether you're a fan of music, stand-up comedy, theater, sports or all of the above, browse the Chicago events calendar on CheapTickets to find great prices on tickets in Chicago.

"Chicago" is actually a Miami word - the Native American tribe, not the city - for the wild leeks found along the mighty Chicago River's shores. Along with the original Miamians, the shores of Lake Michigan were once also home to the Fox and Potawami tribes.

Since the city's official foundation in 1830, Chicago has grown from a tiny fur-trapping settlement to a world-class entertainment hub. Many of the tallest buildings in the world are found in the city's iconic skyline, and you can stroll among them to do a little shopping and dining before or after your concert or event in Chicago.

Did you know these facts about Chicago?

Things to do in Chicago

The city's exciting roster of annual events attract locals and visitors alike. Music fans have no shortage of options in Chicago, and the main attraction for music lovers is Lollapalooza. Held at Grant Park over three days in early August, the music festival celebrated its 25th anniversary in 2016.

Fans of independent films should visit the city in March when Chicago hosts the annual Chicago Underground Film Festival. Also in March, the Chicago River is dyed green for the annual St. Patty's Day Parade. A city staple since 1843, the parade boasts colorful floats and traditional Irish dancers.

Ready to take in the abundant entertainment of Chicago? You can find great deals on Chicago Blackhawks tickets and browse the Chicago events calendar for listings of the hottest events in the Windy City.